Toad in the Hole with Caramelised Red Onion Marmalade 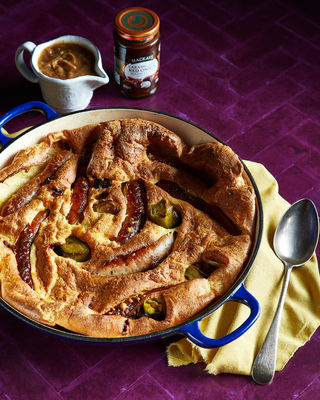 First make the batter. Put the milk and eggs into a large jug and whisk together. Add the flour and salt and whisk vigorously with a hand whisk until no lumps remain. Put the batter into the fridge to chill for at least an hour.

Pour the oil into a large oven-proof dish. A 30cm round casserole dish works but a similar-sized square or rectangular ovenproof dish or baking tray would work well too. Add the sausages and sliced leek, turning them over so they are coated in the oil. Put into the preheated oven and bake for 20 minutes.

Take the sausages out of the oven. The oil should be sizzling hot and you need to work quickly. Dollop the Mackays Caramelised Red Onion Marmalade into the dish in a few different places. Immediately pour the chilled batter into the dish all around the sausages. Put the dish back in the oven quickly. Turn the oven down to 190°C Fan and bake for 25-30 minutes until golden and risen

To make the gravy, melt the butter in medium sized saucepan. Add the sliced onion and a pinch of salt and cook over a medium heat for 5 minutes until the onion is softening and slightly browning. Add the Mackays Caramelised Red Onion Marmalade, Dijon mustard and gravy granules and stir to combine. Add the boiling water and bring to the boil, stirring the whole time until you have a thick gravy.

Serve the Toad in the Hole immediately with the hot onion gravy and steamed green vegetables on the side.